FSM and the Montreal Protocol

Situated in the Department of Environment, Climate Change, and Emergency Management, the National Ozone Unit implements all activities pertaining to the country’s obligations under the Montreal Protocol. As of March 2019, FSM is 1 of 69 countries to have ratified all amendments to the Montreal Protocol including the most recent Kigali Amendment that aims to phase-down the global use of Hydrofluorocarbons (HFCs) that are known to be potent super greenhouse gases.

The National Ozone Unit currently has 5 ongoing projects as listed below. The NOU’s longest ongoing project is FSM’s HCFC Phase-out Management Plan (HPMP) that seeks to phase-out the consumption of Hydrochlorofluorocarbons (HCFCs) within the country. Unlike HFCs, HCFCs are known to be Ozone Depleting Substances (ODS) that destroy our earth’s ozone layer. Because the ozone layer is extremely thin to begin with, it is highly susceptible to damage throughout the century as Ozone Depleting Gases are known to have a lifetime of 10 – 100 years in the atmosphere. In spite of this, the Montreal Protocol has witnesses global success in phasing out potent ODS such as Chlorofluorocarbons (CFCs) since 2010; and Carbon Tetrachloride and Methyl Bromide since 2015

FSM’s Institutional Strengthening (IS) Projects allows for funding to be allocated towards general capacity building and awareness initiatives undertaken by the NOU. The following initiatives were funded under the IS project:

In order to streamline implementation of activities, both the HPMP Stage II Preparation and Enabling Activities under the Kigali Amendment will be done simultaneously; the need to prepare, disseminate, and analyze data covering imported refrigerants and equipment will be collected through the following questionnaires:​

iii. Importer of HCFCs,HFCs, and other alternative and RAC equipment

The HPMP Stage II Preparation project will focus on analyzing and forecasting HCFC consumption, whereas the Enabling Activities will focus and analyzing and forecasting consumption for HFCs and non-ODS alternatives. Currently, both projects are waiting on finalized recruitment of a local consultant to do the data collection and analysis. The local consultant will also be responsible for the Country Program report for the HPMP Stage II Preparation project and the Country Assessment Report for the Enabling Activities project. The NOU and local consultant anticipate collecting data in the summer in line with the consultant’s availability to travel.

Developments under the Promotion of Gold – Standard Energy Efficiency Practice and Policies project are still underway. A major challenge impeding project development is the lack of exporters who are willing to export the new air-conditioning technology to the FSM. Upon speaking with a RAC expert in Paris, it was found that only China and India were producers of the new AC technology that used the R-290 (Propane) refrigerant. Their RAC industry’s main concern is the lack of RAC technicians in FSM who are trained to safely handle and service flammable refrigerants. Also, the FSM does not have any regulations directly addressing safety standards for its’ RAC industry. One major output from the project is to train technicians in each state in how to safely handle and service RAC appliances that use flammable refrigerants. In order to ensure that technicians meet certain competency – based and skill – based standards, they could take a certification test developed by RAC Master Trainer for FSM. Upon passing, DECEM will issue a certificate to recognize the technician’s ability to work in the RAC sector on a national level.

Below is the graph showing HCFC import graph against the reduction schedule for 2015, 2020, 2025, and 2030. The green line shows the actual HFCF consumption values from 2007 to 2017. It is important to note that there were some year in which FSM imported R-141b and R-125 used in fisheries application. Other than that, import of R-22 is the only HCFC refrigerant consumed in the FSM.

There is only one pending HCFC import permit for the calendar year of 2019. Liancheng Fishing Ventures Company has submitted all the requirement documents for a permit; however, the company is currently facing penalties for an illegal importation of ODS into Kosrae State. Until the company resolves the pending issue, DECEM will not issue the company a permit to import any ODS into the country. 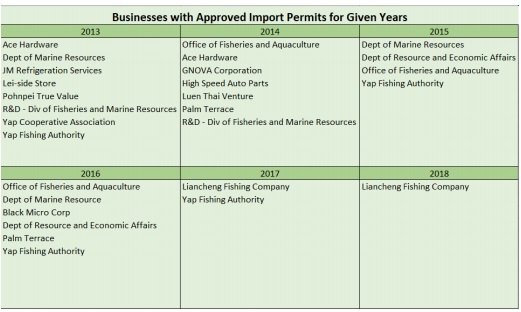 In 2015, the previous National Ozone Officer had managed to draft an amendment to current ODS regulations to include a ban on the importation of new HCFC – based equipment. By doing so, FSM’s future consumption from the inventory of HCFC-based equipment would decrease as new HCFC – based equipment would be barred from entering the country. This would cap future growth in HCFC consumption and keep the country in track to meeting all baseline reduction goals by 2030. However, though the amendment did receive approval from DECEM and the DOJ, the ban was not fully instituted for reasons not fully apparent. There is still a need to conduct a 30 day public notice for the ODS amendment to be fully endorsed by the Secretary of DECEM.

Amendment has been in effect globally since January 1, 2019, however, developing countries may defer implementing control and monitoring mechanisms up until 2021. The only caveat is that if the FSM delays until 2021, it will not have HFC consumption data for 2020 under the licensing system. It is important to note that HFC data collection for 2020 – 2022 will be used to calculate the country’s baseline that will be established in 2024. The average HFC consumption values for 2020 – 2022 will serve as starting point for the global HFC phase-down for A5 Group 1 countries in 2024.

The National Ozone Unit is collaborating with the Center for Technical Education at the College of Micronesia in implementing a Minimum Energy Performance Standard (MEPS) to deter businesses from importing lower quality, energy inefficient appliances into the country. This is one component of the larger Packard Project where COM and the NOU are working to institute a nationwide certification scheme for technicians in the Refrigeration and Air-Conditioning sector. The next generation of RAC appliances will tend to be more energy efficient and start to use flammable refrigerants with incredibly low Global Warming Potential as opposed to HCFCs and HFCs.

Oversight on ODS is done on the national level with key stakeholders in enforcement being the State Customs Offices and Environmental Protection Agencies. Given that ODS are manufactured outside of the FSM, oversight is done primarily through our Border Protection Officers who ensure that ODS imports are not brought into the country illegally – without an approved import permit from DECEM or through misdeclaration of goods.

In order to improve monitoring and enforcing FSM’s ODS regulation, the NOU conducts site inspections of several businesses that either service or destroy HCFC-based equipment. The NOU was notified that several defunct AC units were picked up by the Mai Xiong Company in Nett for salvage and disposal. The major concern was how the company was going about recovering the ODS still contained in these decommissioned units; As the willful discharge of any ODS into the atmosphere is subject to penalties up to $50,000 under FSM’s ODS regulations. After speaking to Mr. Xiong, it was found that he did not have any recovery machine and recovery cylinders. Knowing this, the assumption had been confirmed that that the company had crushed up the AC units without retrieving the gas to prevent ODS from being discharged into the atmosphere. The NOU urged Mai Xiong’s Company to contact the RAC Master Trainer to borrow the refrigerant recovery machine and purchase their personal cylinders in order to recover the ODS the next time they salvage or dispose of old AC units that contain ODS. In complying with the demands, the NOU will not impose penalties on the Mai Xiong Company.